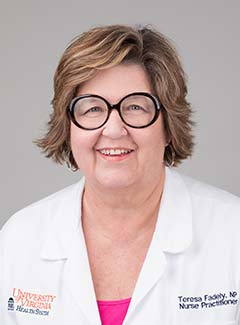 Teresa Fadely is an acute care nurse practitioner in the Surgical Trauma Burn Intensive Care Unit at UVA. She also holds an advanced certification in holistic nursing and currently leads the Central Virginia chapter of the American Holistic Nursing Association. Holistic nursing is her passion, and she hopes to bring the concept of self-care to nurses to prevent burnout and control stress in our ever-changing healthcare system.

Ms. Fadely was born and raised in Indiana. After earning her BSN from Indiana University School of Nursing in 1992, she began working in critical care. She also did some work in home care and hospice. She went on to graduate school and received her MSN from Indiana University School of Nursing as an acute care nurse practitioner.

Ms. Fadely and her husband Gary have raised two daughters. Their older daughter has two daughters of her own, and brought Ms. Fadely and her husband to Virginia to be closer to them growing up. Their younger daughter lives in California, which gives them the opportunity to visit. They spend a significant amount of time with their granddaughters, and getting to know the Charlottesville area.