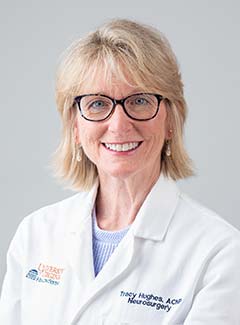 Tracy Hughes is an acute care nurse practitioner in the Department of Neurosurgery at UVA. She has worked in neurosurgery for 25 years, first as a registered nurse in the Neuroscience ICU at Medical College of Virginia Hospitals, and later as a nurse practitioner at VCU Health System and UVA.

Ms. Hughes was born in Hampton and grew up in Lynchburg and in Cary, North Carolina. She earned her bachelor’s in nursing from the Medical College of Virginia (now VCU) in 1992, and her master’s as an acute care nurse practitioner from VCU in 2000.

In 2008, she worked as the neurological services program coordinator at Martha Jefferson Hospital, where she coordinated the hospital’s development of a primary stroke center. She then worked as nurse practitioner in Georgia before returning to UVA in 2013.

Ms. Hughes has a dog, two grown children and two grandchildren, who live in Georgia. She enjoys gardening, biking, running and hiking.