UVA Heart and Vascular Center has experienced providers and processes in place — 24 hours a day, 365 days a year — to treat heart attacks as quickly as possible.

UVA cares for more than 450 patients with heart attacks each year.

The American College of Cardiology National Cardiovascular Data Registry ACTION Registry®-GWTGTM tracks the number of heart attack patients who die in the hospital. A lower mortality number means patients are more likely to live after being treated for heart attack. 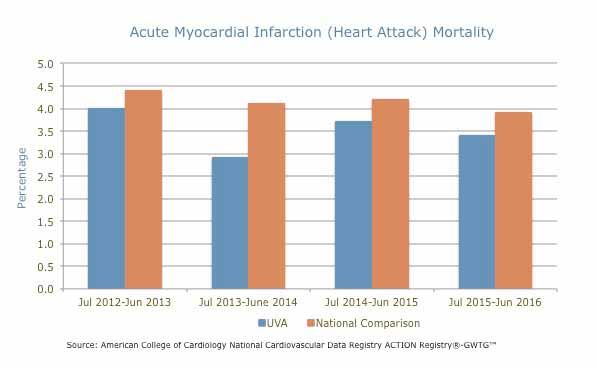 A lower number is better.

A STEMI heart attack happens when a coronary (heart) artery is completely blocked and a large part of the heart muscle cannot receive blood. PCI is a procedure performed to open blocked coronary arteries.

The faster a heart attack patient receives PCI, the less damage the heart attack causes. Less damage means a patient is more likely to live and return to a high quality of life.

The American College of Cardiology National Cardiovascular Data Registry CathPCI Registry® tracks the average length of time between when a patient arrives at the hospital and when the patient receives PCI. 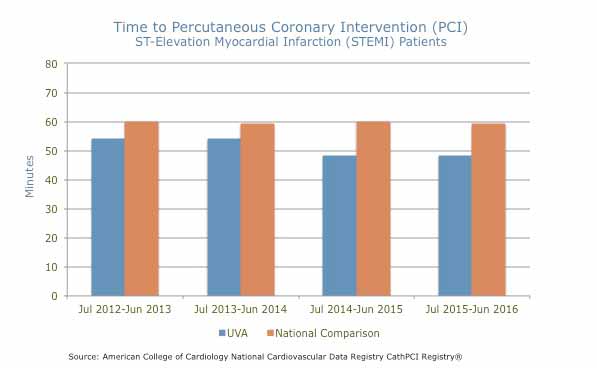 A lower number is better.

Median time in minutes from hospital arrival to primary percutaneous coronary intervention (PCI) for ST-elevation myocardial infarction (STEMI) patients. Does not include transfers.

Patients generally do better and have fewer problems after a heart attack if their care team takes the following actions:

The American College of Cardiology National Cardiovascular Data Registry ACTION Registry®-GWTGTM tracks the number of patients at UVA and other hospitals whose care team took all of these actions while they were in the hospital. This measure is called “discharge performance.” 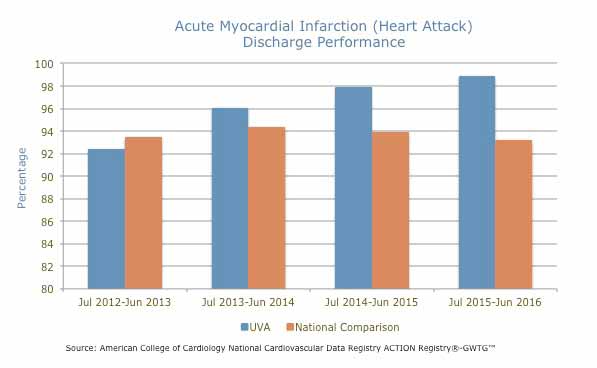 A higher number is better.

Composite of discharge performance among patients who have been treated at UVA for acute myocardial infarction (heart attack).