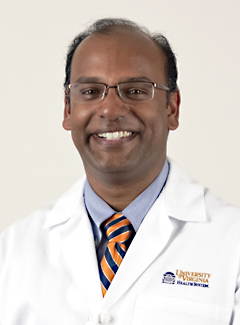 Dr. Krishnaraj’s seeks to improve the quality, safety, and efficiency of imaging and health care in the United States by leveraging his formal training in public health, clinical radiology, and informatics to maximize radiology’s value to society. The focus of his research is on patient centered care, LEAN driven process improvement, the value of reporting, the role of artificial intelligence, the impact of social media in radiology, and the implications of evolving US health policy on the field of radiology.

Arun Krishnaraj MD, MPH, is an associate professor of Radiology and Medical Imaging at the University of Virginia, where he serves as vice chair for Quality and Safety, director of the division of Body Imaging, chief of the section of Abdominal Imaging, director of Body Procedures, and fellowship director of Body Imaging. From 2011-2013 he served as junior faculty at Harvard Medical School, where he worked in the division of Abdominal Imaging and Intervention at the Massachusetts General Hospital.

He is a recognized leader in organized medicine, serving on numerous committees and commissions of the American College of Radiology (ACR), the Radiology Society of North America (RSNA), the Society of Abdominal Radiology (SAR) and the Association of University Radiologists (AUR). Dr. Krishnaraj’s leadership efforts have been recognized by the American Medical Association Foundation, which awarded him their prestigious Excellence in Medicine Leadership award in 2012, one of only 4 early career physicians in the country to have received this honor. Moreover, Dr. Krishnaraj has been annually included in the “Best Doctors in America” list since 2015 and has been honored with the Dean’s Award for Clinical Excellence and the Paul Dee Teacher of the Year award at the University of Virginia.