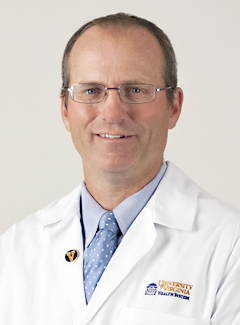 Colon and rectal surgery and diseases and medical education

He became Chief of Colon and Rectal Surgery in 2007. He is also the Surgical Director of the Digestive Health Center of Excellence at UVA.

Dr. Friel specializes in the treatment of colorectal conditions. He has a particular interest in the treatment of rectal cancer as well as inflammatory bowel disease, where he is recognized as a regional and national leader, being recently recognized as one of the "Best Doctors in America." He also specializes in minimally invasive approaches, including laparoscopy and colonoscopy.

Dr. Friel is a leader in medical education for both residents and medical students. He is the Associate Program Director of the General Surgical Residency and has been widely recognized for his teaching abilities. He recently received a national teaching award from the Association of Surgical Education. In addition to this honor, he has received multiple local awards from both the medical students and residents, including the Leonard Tow Humanism Award for how he deals with his patients and their complex problems.

Dr. Friel's research interests focus on the treatment of colon and rectal disease. He has published numerous manuscripts and book chapters on these subjects and currently sits on the editorial board of The Diseases of Colon and Rectum, the national journal for the American Society of Colon and Rectal Surgery.