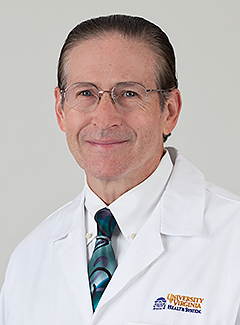 Dr. Curt Tribble was born in Nashville, Tennessee, when his father, also a thoracic surgeon, was in medical school. His family, which eventually included five younger brothers (two of whom also became surgeons), frequently moved during their father's training and military service, before eventually settling in Columbia, South Carolina.

Dr. Tribble was the valedictorian of his class at Presbyterian College in South Carolina, where he majored in english and biology. He then attended Vanderbilt University School of Medicine before moving to Charlottesville to train in the University of Virginia's surgery and thoracic surgery residency programs. He then did a two-year post-doctoral fellowship in the UVA department of physiology and joined the UVA School of Medicine faculty with joint appointments in surgery and physiology.

During the decades, Dr. Tribble served as the program director for the surgery residency, the director of the surgery clerkship, the councilor for the UVA chapter of the AOA Medical Honor Society, and the vice chair of the department of surgery. He was also the surgical director of both the cardiac transplant and the lung transplant programs. With his decades-long partner, Dr. Irv Kron, he helped direct one of the thoracic surgery research labs, eventually serving as the co-primary investigator on a number of National Institutes of Health (NIH) grants and on the UVA T32 NIH training grant, which has been continuously funded for several decades. Dr. Tribble eventually relocated to the University of Florida, where he served as vice-chair of the department of surgery, chief of the division of thoracic surgery, and program director for the thoracic surgery residency there.

During this time, he was elected to the American Board of Thoracic Surgery and served as the chair of the Thoracic Surgery Directors Association Education Committee. He eventually took a similar position at the University of Mississippi, where he was also the vice-chair of the department. In 2014, he returned to the University of Virginia, where he is the associate program director of the thoracic surgery residency and serves as the mentor for the T32 training grant in the thoracic surgery laboratory.