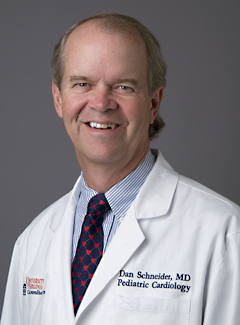 Dr. Schneider is the medical director of noninvasive imaging/echocardiography and fetal echocardiography at UVA. He grew up in Alexandria, South Dakota, a small town of about 500 people, and graduated high school in a class of 45 students. He earned his undergraduate and medical degrees at Creighton University in Omaha, Nebraska.

Dr. Schneider then spent 16 years at Children’s Hospital of The King’s Daughters in Norfolk, where he was medical director of noninvasive imaging/echocardiography and served the last two years as chief of pediatric cardiology. He came to UVA in 2008.

Dr. Schneider married his wife, Lisa, in 1988 and has five children. He is active in his church and loves sports, especially college sports.