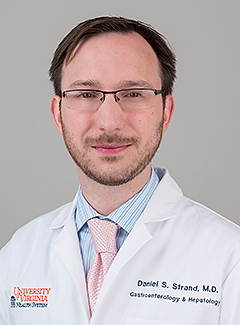 Daniel Strand, MD, FASGE, is a board-certified gastroenterologist and director of pancreatobiliary endoscopy at UVA. As a full-time interventional or therapeutic endoscopist, he specializes in the treatment of patients who need advanced GI endoscopic procedures that are not commonly available. In particular, he cares for individuals with complicated diseases of the pancreas and biliary tract, as well as those with luminal GI tract (esophagus, stomach, small intestine, or colon) disorders that require endoscopy.

With the addition of Dr. Strand’s several distinguishing services, UVA has been named a Center of Excellence for pancreatitis care by the National Pancreas Foundation (NPF). He serves as director of the UVA NPF Chapter, is an active member of the American College of Gastroenterology, and was elected in 2019 as a fellow of the American Society for Gastrointestinal Endoscopy.

His clinical interests include:

Benign and malignant diseases of the Biliary System

His research interests include:

Born on Long Island, and like many native New Yorkers, Dr. Strand grew up on the west coast of Florida. He went to undergraduate college and medical school at the University of Florida (Gainesville), where he stayed for internal medicine residency training. He came to UVA to complete fellowship training in gastroenterology & hepatology and interventional advanced endoscopy.

Outside of work, Dr. Strand enjoys cooking, hiking and spending time with his wife and three children.

2019   Fellow of the American Society for Gastrointestinal Endoscopy

2017   Excellence in Clinical Care, University of Virginia Department of Medicine