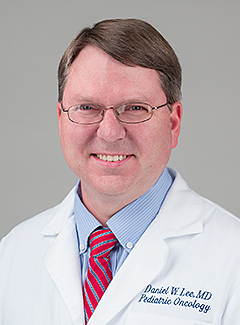 Board-certified in general pediatrics and pediatric hematology and oncology, Daniel “Trey” Lee, MD, is a pediatric oncologist and the director of pediatric hematopoietic stem cell transplantation and immunotherapy.

Lee’s medical training began at the University of Texas Health Science Center in Houston, Texas, where he received his medical degree in 2003. He then studied as a postdoctoral fellow for two years at M.D. Anderson Cancer Center. This was followed by a pediatric internship and residency training at Children’s Memorial Hermann Hospital and M.D. Anderson Cancer Center. Lee then joined a combined pediatric hematology and oncology fellowship training program at the National Cancer Institute, Pediatric Oncology Branch (POB), and Johns Hopkins University. After fellowship, he stayed on staff in the POB as an assistant clinical investigator for three years before joining the University of Virginia faculty in 2016. Since his arrival to UVA, Lee has been building both transplant and novel cell-based immunotherapy programs for children and adults with cancer.

Lee is an innovator in the field of immunotherapy and was among the first in the world to treat children and young adults with lymphoblastic leukemia and B-cell lymphomas with chimeric antigen receptor (CAR) T-cell therapy, which uses a patient’s own modified immune cells to fight cancer. He maintains a laboratory, which has developed several new CAR T therapies for leukemia and pediatric brain tumors. For this novel research, Lee was recognized with the 2017 Top 10 Clinical Research Achievements Award by the Clinical Research Forum.

Lee also spearheaded a multi-institutional effort to redefine the grading system or phases of cytokine release syndrome (CRS), the main side effect of CAR therapy. He developed a user-friendly treatment algorithm for managing CRS based on this system, which is widely used and considered the gold standard. Expanding on that success, he recently co-led a large international consensus effort to refine CRS grading and to define and grade a new and unique side effect of T-cell-engaging immune therapies called immune effector cell associated neurotoxicity syndrome (ICANS).

In addition, Lee is the principal investigator on two important immunotherapy trials at UVA, one for children with relapsed or treatment-resistant leukemia and another for children with neuroblastoma. Lee’s laboratory is also developing other CAR-based therapies for the treatment of pediatric brain tumors, including medulloblastoma, ependymoma, and diffuse intrinsic pontine gliomas (DIPG), and developing new ways to improve the safety of CAR T therapy.