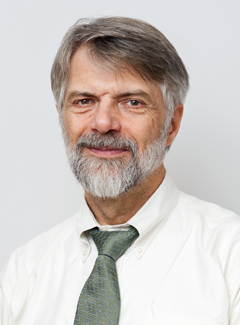 Edward Bertram, MD, is a neurologist specializing in epilepsy and seizures. The son of an Army officer, Dr. Bertram was born at Fort Lee, Virginia, but moved around the country and the world growing up, with noteworthy stays in Germany and Nepal. He attended the University of North Carolina, taking a year off partway through to work on a farm in Germany that had been his grandfather's childhood home. After completing his undergraduate degree, he stayed on at UNC for medical school.

Following his residency in internal medicine at the Medical College of Virginia (now VCU), Dr. Bertram came to Charlottesville for his neurology training and never left. He completed fellowships at UVA in EEG and epilepsy and in experimental epilepsy, and then joined the faculty. Shortly afterwards, he started the epilepsy monitoring unit and the epilepsy surgery program. He has been a professor of neurology since 2004.

Dr. Bertram has worked with several professional organizations and is now the Secretary General for the International League Against Epilepsy. His wife, Nancy, recently retired after many years as an associate dean in the College of Arts and Sciences at UVA. She is now pursuing her passions of music and gardening. In addition to cycling and swimming, Dr. Bertram is allowed to pull weeds and cut the grass. The couple have two children, who have long since flown the coop but live close enough to visit from time to time.