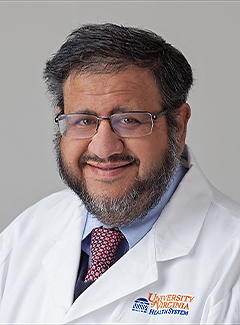 Emaad Abdel-Rahman, MD, PhD, has been a nephrologist for more than three decades specializing in caring for elderly patients with kidney disease, dialysis patients and patients with acute and chronic kidney diseases. He is director of the UVA Kidney Center Clinic and main hemodialysis unit and leads one of the few home hemodialysis units in the country. Abdel-Rahman has been actively involved in clinical research throughout his career, including both investigator-initiated and industry-related trials. He now serves as interim director of the Nephrology Clinical Research Center within the UVA Division of Nephrology.

Abdel-Rahman was born in Lawrence, Kansas, and earned his medical degree from Ain Shams University in Cairo, Egypt. He finished his medical residency and renal fellowship training in Egypt, where he worked as a nephrologist before returning to the United States. Abdel-Rahman completed a second medical residency at Northeast Ohio Medical University, followed by a clinical and research fellowship at the University of Wisconsin before joining the faculty at UVA.

He has received several clinical awards, including the UVA School of Medicine Dean’s Award for Clinical Excellence, and the Department of Medicine Mentoring Excellence award. He has served on the Advisory Geriatric Nephrology Committee and as a member of the steering committee of the Kidney Health Initiative at the American Society of Nephrology.

Abdel-Rahman lived in many places before settling in Charlottesville with his wife, a retired UVA faculty member, 20 years ago. The couple has twin adult children. In his free time, Abdel-Rahman enjoys reading and traveling.