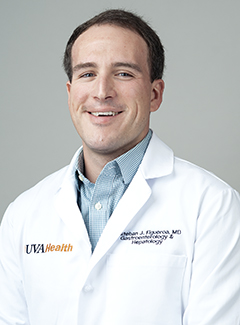 Esteban Figueroa, MD, cares for patients who have inflammatory bowel disease, including ulcerative colitis and Crohn’s. He also offers endoscopy for colon cancer screening and diagnosis of general gastrointestinal conditions such as GERD and dyspepsia.

During medical school, Dr. Figueroa was inducted into the Gold Humanism Honor Society and the Alpha Omega Alpha Honor Medical Society. In 2017, during his UCSF internal medicine residency, he was awarded the National Hispanic Medical Association Resident of the Year. He served as chief fellow for the final year (2019-2020) of his gastroenterology fellowship at UVA.