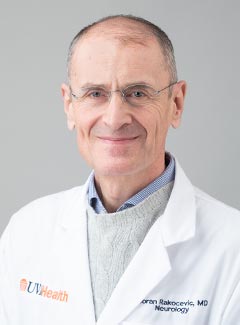 Goran Rakocevic, MD, joined the UVA Department of Neurology as chief of the Division of Neuromuscular Disorders in 2019. He specializes in caring for patients with a variety of neuromuscular disorders, including myasthenia gravis and amyotrophic lateral sclerosis (ALS), and is actively involved in research and training future providers.

Born in Montenegro, Rakocevic spent his childhood in Bosnia and completed medical school in Sarajevo. When the civil war broke out there in 1992, Rakocevic moved to Ottawa, Canada. He then continued his medical training in the U.S., completing an internship at Brown University, a neurology residency at the University of Kansas Medical Center and a five-year neuromuscular fellowship at the National Institute of Neurological Disorders and Stroke at the National Institutes of Health (NIH).

Rakocevic is married with two children. In his free time, he enjoys sports, poetry and being outdoors. He’s also been involved in a number of volunteer activities that focus on patient support and advocacy.