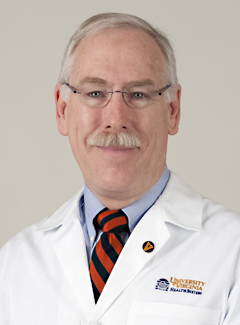 Chair of Obstetrics and Gynecology

His research has focused on the pharmacologic treatment of preterm labor, techniques of prenatal diagnosis, the role of parathyroid hormone-related peptide in the human uteroplacental unit and more recently, the effects of periodontal disease and pregnancy outcomes. He was PI of the University of Kentucky Building Interdisciplinary Research Center for Women’s Health (BIRCWH), NIH-funded grant, as well as a site director of a march of Dimes Prematurity Prevention Initiative, “Healthy Babies are worth the Wait.”  Currently, Dr. Ferguson is a referee for many respected journals including the American Journal of Obstetrics and Gynecology, Obstetrics and Gynecology, the American Journal of Perinatology and Editor for Obstetrics Section of the Journal of Women’s Health.

Dr. Ferguson has been co-editor of two books:  Anesthesia in obstetrics: Maternal, fetal and neonatal aspects, 2nd Edition.  Boston: Butterworth Publishing Company, 1986 and Outpatient Perinatal Education Program. A Self-Instructional Program in 3 Volumes. Book 1, The High Risk Mother and Fetus. University of Virginia, Copyright, 1991-1996. He has written over 120 journal articles and chapters. Dr. Ferguson has also written over 90 abstracts that have been presented at regional, national or international research meetings.