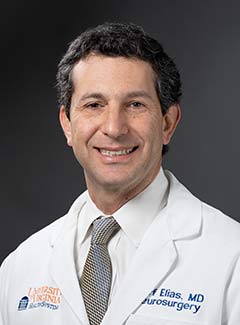 William Jeffrey Elias was born in Durham, North Carolina, in 1968. He grew up in Roanoke as the son of a neurologist. He attended Wake Forest University and pursued a Bachelor of Arts degree in chemistry while also playing junior varsity tennis. While in college, he was awarded a scholarship for undergraduate research in chemistry and he graduated Phi Beta Kappa. He attended the University of Virginia for medical school and neurosurgical training. During neurosurgical training, he completed intramural fellowships in neuropathology and spinal surgery before spending a year in Plymouth, England, as a senior registrar. Following residency, he pursued additional training in stereotactic and functional neurosurgery at the Oregon Health Sciences University.

In 2002, Dr. Elias returned to the University of Virginia where he is currently the director of stereotactic and functional neurosurgery with a large multidisciplinary program in the surgical treatment of movement disorders, epilepsy and spasticity. He currently sits on the medical advisory board of the International Essential Tremor Foundation (IETF). Dr. Elias’ clinical team includes Caroline Metsch, PAC, Kathy Maynard, RN, and Karen Osteen.

Scientifically, Dr. Elias is pursuing research projects that match his clinical interests in movement disorders and epilepsy surgery. His clinical research involves the use of MR-guided focused ultrasound for the treatment of movement disorders such as essential tremor and Parkinson's disease.  Other image-guided investigations involve the use of laser interstitial thermal therapy and MRI-guided deep brain stimulation.  In the laboratory, he is studying the use of focused ultrasound to modulate the central nervous system and to map deep brain targets.

Academically, Dr. Elias serves on the editorial board of the Journal of Neurosurgery and holds the rank of professor with tenure.