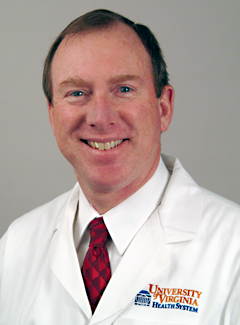 Dr. Kenneth Norwood is a professor of pediatrics, specializing in developmental pediatrics. He is board-certified in both pediatrics and neurodevelopmental disabilities. In addition to his role at UVA, he is the chairperson of the American Academy of Pediatrics’ Council on Children with Disabilities.

Dr. Norwood was born in Lancaster, Pa. He completed his undergraduate studies at Davidson College in North Carolina, then earned his medical degree from Wake Forest University School of Medicine in Winston-Salem through a Navy scholarship. He completed his internship and residency in pediatrics at Naval Medical Center Portsmouth, serving as chief resident during the final year of his residency. He went on to complete a fellowship in developmental pediatrics at Johns Hopkins University School of Medicine.

His 26-year career in the Navy included posts in Portsmouth, Va.; Pensacola, Fla.; and Okinawa, Japan. His expertise led him to provide developmental pediatric evaluations of children whose families were stationed at Keflavik, Iceland; Bermuda; Guantanamo Bay, Cuba; and Guam. He retired from the Navy in 2005 with the rank of captain. Dr. Norwood joined the faculty at the University of Virginia in 2005.

Dr. Norwood met his wife, Anne, during his undergraduate studies at Davidson College; they have been married for 35 years and have two grown sons. Outside of his role at UVA, he and Anne enjoy gardening, hiking and canoeing.