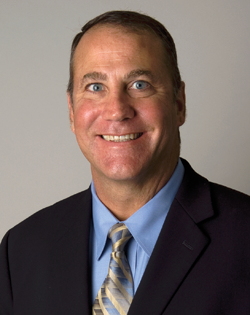 Dr. Mark Miller is the S. Ward Casscells Professor of Orthopaedic Surgery and the division head for Sports Medicine at the University of Virginia. His clinical practice focuses primarily on knee and shoulder arthroscopy and complex reconstructions. He is board-certified in both orthopaedic surgery and orthopaedic sports medicine.

Born in Mesa, Ariz., Dr. Miller’s family also lived in Kansas and Texas before his father’s service in the U.S. Air Force took them to Travis Air Force Base in California, where he spent the rest of his youth. Dr. Miller attended the Air Force Academy in Colorado, serving as a civil engineer in the Air Force prior to medical school. He earned his medical degree from the Uniformed Services University of the Health Sciences in Bethesda, Md., and completed an internship and residency in orthopaedic surgery at Wilford Hall Ambulatory Surgical Center, an Air Force medical center in San Antonio, Texas.

Dr. Miller completed a fellowship in sports medicine and shoulder surgery at the University of Pittsburgh and then served as a surgeon at the Air Force Academy and at Wilford Hall. He was also selected for two traveling fellowships, one in North America and the other in the Asia-Pacific.

When his Air Force training was complete in 2000, Dr. Miller joined the faculty at UVA. He continued to serve in the Air Force Reserves for several more years.

Dr. Miller is married with four grown children — three boys and a girl. In his spare time, he enjoys golf, skiing, fishing and boating.