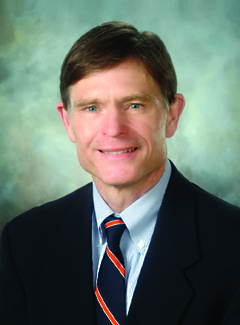 Clinical assessments and management of spinal deformities in children. Management of cerebral palsy and other neuromuscular conditions.

Dr. Abel has been with the UVA Health since 1993. He has served in numerous leadership roles including chair of the department of orthopaedic surgery between 2002 and 2003 and from August of 2008 through August 2013. He has been involved in committees overseeing quality and strategy. Dr. Abel has joint appointments at the rank of professor in the departments of pediatrics and neurosurgery.

He serves as the division head of pediatric orthopaedics, which has been ranked in the top 50 such programs by US News & World Report. He is also the Medical Director of the Motion Analysis & Motor Performance Laboratory. His expertise covers a broad range of musculoskeletal conditions affecting children. Approximately 50% of his practice deals with the management of spinal conditions in children, including healthy children and children with chronic conditions such as cerebral palsy.

Mark Abel, MD, is not accepting new patients or referrals but maintains privileges at UVA for current patients.