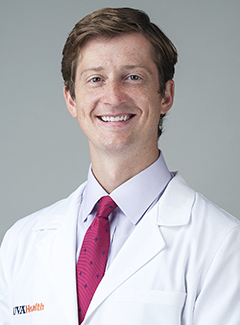 Michael Ayers, MD, is a sports cardiologist caring for hypertrophic cardiomyopathy patients, a genetic condition causing thickening of the heart muscle. While hypertrophic cardiomyopathy is one of the most common conditions diagnosed in competitive athletes, Ayers treats any cardiac symptoms or concerns, inherited cardiac conditions, or incidental cardiac findings in a broad spectrum of athletes, ranging from recreational runners and cyclists to professional athletes. Trained in advanced lipidology with a clinical focus on preventive cardiology, he also manages patients with a strong family history of premature heart attacks, cholesterol or lipid disorders, or high individual risk for cardiac events.

Ayers has advanced imaging expertise, with board certifications in advanced echocardiography, cardiac computed tomography (CT), and nuclear cardiology. He utilizes these modalities in the care of all of his patients, but they are particularly useful in caring for patients with advanced valvular or structural heart disease. He is also interested in managing cancer patients who are receiving potentially cardio-toxic chemotherapies, applying primary prevention and advanced imaging training to protect their hearts during their cancer treatments.

After growing up in rural western North Carolina, Ayers attended Duke University in Durham, North Carolina, where he played collegiate rugby. He majored in theater studies, with a minor in biological anthropology and anatomy, and graduated with highest honors. After receiving his undergraduate degree, he took three years to pursue his passion for musical theater. As a member of the Screen Actors Guild and Actors’ Equity Association, he performed in major productions in New York and Chicago. In 2007, Ayers decided to take a different path and applied to medical school. He attended Columbia University College of Physicians and Surgeons in New York City and graduated Alpha Omega Alpha. At Columbia, Ayers met his wife, Emily, who was also an aspiring physician.

The couple left New York City to train at the Hospital of the University of Pennsylvania in Philadelphia. Ayers completed a residency in internal medicine and a fellowship in cardiovascular medicine in Philadelphia. During his training, he was voted Best Resident Teacher by fellow interns and received the Penn Pearl Award. A teaching award by the entire medical school student body. He was one of five national finalists for the American Heart Association’s Laennec Young Clinician Award, which recognizes outstanding clinical acumen, analytic skills, and teaching ability in future academic cardiologists.

Ayers joined the UVA faculty in August 2020 and his wife, a lymphoma specialist in the Department of Hematology and Oncology. The couple has two young boys and two dogs, and they love the Charlottesville area. In his free time, Ayers loves sports, particularly basketball and football, and is an avid runner and cyclist.