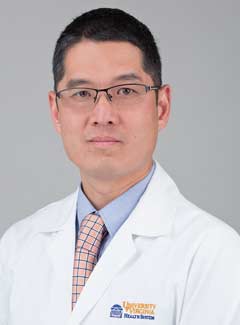 Dr. Min Park is the director of cerebrovascular and endovascular neurosurgery and associate residency program director of neurosurgery at UVA. An Indiana native, he earned a doctorate in medicine from the Indiana University School of Medicine in 2002. He completed his general surgery internship and neurological surgery residency at the University of California San Diego Medical Center.

From 2009-2013, Dr. Park served as a lieutenant commander and staff neurosurgeon at the Naval Medical Center San Diego. He deployed to Kandahar, Afghanistan in support of Operation Enduring Freedom, where he was the sole neurosurgeon for the southern half of the combat theater and performed over 150 life-saving operations in six months. He has been awarded the Navy and Marine Corps Commendation Medals, Navy Unit Commendation, Afghanistan Campaign Medal and NATO Medal, among others.

He is a recognized thought leader in endovascular neurosurgery/neurointerventional surgery, with over 150 peer-reviewed publications and book chapters. He is the lead editor on the seminal textbook Flow Diversion of Cerebral Aneurysms as well as three other forthcoming textbooks related to Neurointerventional surgery and carotid artery pathology, including Evidence-Based Decision Making in Neurointerventional Surgery. Dr. Park has served organizational neurosurgery as the director of the Congress of Neurological Surgeons Cerebrovascular Oral Boards Review webinar series and has been invited to speak across the country at both national and regional meetings.

Dr. Park helped lead UVA Health to its highest designation as a Center of Excellence for its care of cerebral cavernous malformations. “Being recognized as a Center of Excellence took a lot of hard work and collaboration from many people here at UVA Health,” said Park. To earn this honor, the Angioma Alliance’s criteria is to see more than 50 patients annually and a team of experts specializing in this condition.