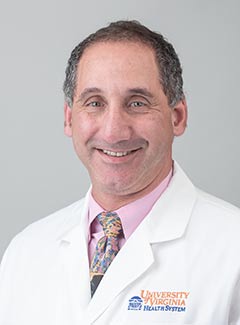 Mohan Nadkarni, MD, has helped shape the practice of primary care at UVA since he began his tenure in 1993. Chief of the Division of General, Geriatric, Palliative and Hospital Medicine, he is a board-certified general internist whose primary focus is helping patients manage chronic illnesses like diabetes and hypertension.

Nadkarni has a particular interest in the social factors that influence patient health, specifically among vulnerable populations. His desire to care for others, particularly those in need, has influenced his career, his research and his life outside of clinic.

Nadkarni was born in Bethesda, Maryland, and graduated from University of Pennsylvania Medical School. He spent a fellowship year at an organization in Washington, D.C., working in medical consumer advocacy. Then, at the start of his primary care internal medicine residency at UVA, he co-founded the Charlottesville Free Clinic. In 2013, Nadkarni was recognized for his long-time service to the clinic with a Physician Volunteer Champion award from the Virginia Association of Free and Charitable Clinics.

As a professor of medicine, Nadkarni has made it his mission to encourage students to consider the social issues that impact a patient’s health. And he’s been recognized for his success; Nadkarni received the Harrison Distinguished Educator Award for lifelong excellence in medical teaching.

Nadkarni remains on the board of the Charlottesville Free Clinic as well as the Thomas Jefferson Area Coalition for the Homeless. Married with seven sons, he spends his free time volunteering at the free clinic, coaching youth sports and refereeing for local high school basketball teams. He also enjoys tennis, hiking, basketball, tennis, and adventure sports like hang gliding, and has climbed Mt. Kilimanjaro.