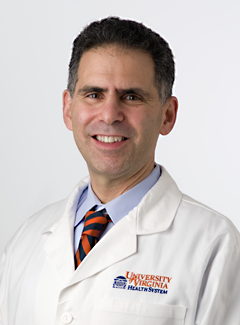 I graduated Mount Sinai School of Medicine in 1984, and after a one-year internship, joined the active duty military as a medical officer in the United States Army from 1985 - 2006. My residency in Urology was completed at Walter Reed Army Medical Center in 1995. In 1998, I completed a fellowship in Endourology, specializing in minimally invasive surgery for kidney stones and laparoscopy, at the University of California, San Francisco.

Since joining the staff at the University, I have continued to cultivate my interests in daVinci robotic surgery, kidney stone disease, and cutting edge minimally invasive procedures, such as percutaneous cryotherapy for the treatment of kidney tumors. My research interests include kidney stones, robotic surgery, telesurgery (cooperative surgery done by surgeons located in different geographic areas), and surgical education. Additional procedures I perform at UVA are greenlight photovaporization of the prostate, urolift, robotic prostatectomy, bladder stone removal, ureteral reimplant, ureteroureterostomy, ureteroscopy and percutaneous renal ablation.