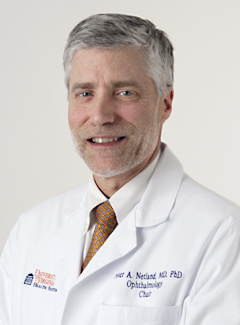 Peter Netland, MD, received his undergraduate degree at Princeton University, his PhD from Harvard University, and his medical degree from the University of California, San Francisco. He completed his residency in Ophthalmology, followed by a clinical fellowship in glaucoma at the Massachusetts Eye and Ear Infirmary. There he was subsequently appointed associate director of the Glaucoma Service at the Massachusetts Eye and Ear Infirmary, Harvard Medical School. He joined the faculty at the University of Tennessee School of Medicine in Memphis, where he was the Siegal Professor of Ophthalmology and Vice-Chair. Dr. Netland was appointed the DuPont Guerry III professor and chair of the department of ophthalmology at the University of Virginia in 2009, and the Vernah Scott Moyston professor and chair in 2012.

In addition to his recognized expertise in the clinical management and surgical treatment of glaucoma, Dr. Netland is an innovative and prolific investigator. He has written more than 300 peer-reviewed publications. He has published six textbooks, most recently the third edition of Glaucoma Medical Therapy. Dr. Netland has delivered numerous named and invited lectures on clinical and surgical management of glaucoma, and on glaucoma research at national and international meetings. He has been a perennial best-doctors award recipient. He has been director of a long-standing AUPO FCC-certified clinical glaucoma fellowship program.