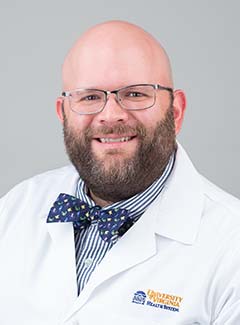 Peter Murray, MD, is a neonatologist who cares for critically ill infants in the neonatal intensive care unit (NICU). He has a particular interest in biomedical ethics and is working with a national group to create a best practice checklist for periviable birth, or deliveries that occur before 26 weeks of gestation. As an assistant professor at the UVA School of Medicine, Murray educates future providers about the complex interaction between neonatology and biomedical ethics.

Originally from the Bronx, New York, Murray grew up in South Florida and attended undergraduate school at the University of Florida. He liked it so much there that he stayed an extra year to earn a master’s degree in management. Murray then decided to make a move to the Northeast to pursue his medical training, and attended medical school at Temple University School of Medicine in Philadelphia, Pennsylvania.

Murray completed a fellowship in neonatal-perinatal medicine on the biomedical ethics track at Yale University School of Medicine, where he trained under the leadership of internationally known ethicist and neonatologist Mark Mercurio, MD, MA. Following his clinical fellowship, Murray pursued another fellowship in biomedical ethics at Harvard Medical School to further hone his skills in this challenging field.

Outside of the office, Murray enjoys hiking the Shenandoah and Blue Ridge mountains with his wife, daughter and golden doodle. When not trekking in the mountains, they can usually be found at a craft brewery or one of Charlottesville’s many fine restaurants.