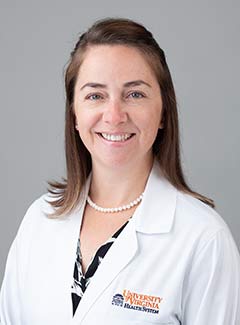 Sarah Lepore, MSN, APRN, NNP-BC, is a neonatal nurse practitioner. She sees patients in the neonatal intensive care unit (NICU) and specializes in caring for extremely low birth weight and critically ill newborns and infants. Lepore is passionate about evidence-based practice and has served as the chair of multiple practice committees within UVA over the years.

Born in Hawaii, Lepore spent most of her childhood in Northern Virginia. She earned a Bachelor of Science in Nursing degree from UVA, followed by a Master of Science in Nursing degree from the University of Alabama, Birmingham. She has been on staff at UVA since 2005, first as a registered nurse in the NICU, and then, after earning her master’s degree in 2013, as a certified nurse practitioner.

In addition to her clinical work, Lepore is a volunteer on the board of directors for the Smith-Kingsmore Syndrome Foundation, a charity for a rare genetic disorder that affects her youngest son. She and her husband, Dan, live in Crozet with their four children.