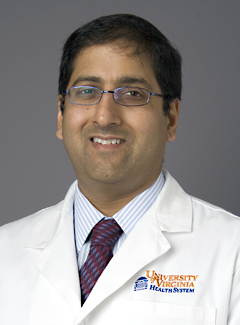 Shiv Khandelwal, MD, is a radiation oncologist at UVA. He sees patients with all types of cancer as well as benign conditions for which radiotherapy may be indicated. He subspecializes in breast, head and neck, skin and soft tissue cancers.

After practicing in Athens, Georgia, where he was elected president of the Coalition of Athens Area Physicians, and in Charlotte, North Carolina, Dr. Khandelwal returned to academic practice with UVA in 2005. He is an associate professor of radiation oncology and teaches residents who are training to become radiation oncologists.

He served as associate editor for Radiology, the journal of the Radiological Society of North America, from 2005-2013, served as medical director of radiation oncology at Augusta Health from 2005-2011, and has served as medical director of radiation oncology at Culpeper Medical Center since the facility opened in March 2011. He is a Castle Connolly Top Doctor, has been named a Top Doctor by Northern Virginia Magazine many times, serves as the secretary-treasurer of the Culpeper Medical Center Medical Staff, served as president of the Albemarle County Medical Society from 2013-2015, and was named a fellow of the American College of Radiation Oncology in 2000.