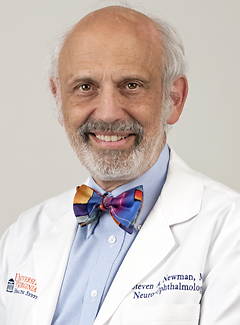 Steven Newman, MD, was born in Brooklyn, NY, and grew up on Long Island. He attended Princeton University, graduating in theoretical physics in 1969. In 1973, he completed medical school at Albert Einstein College of Medicine where he was inducted into AOA. He trained in internal medicine at Barnes Hospital, Washington University in St. Louis, followed by an immunology/rheumatology fellowship at the National Institutes of Health, National Institute of Arthritis, Metabolism and Digestive Diseases. He did a second residency in ophthalmology at Washington University and a fellowship in neuro-ophthalmology at the Wilmer Eye Institute at Johns Hopkins University in Baltimore, MD.

He came to UVA in 1981 as an assistant professor of ophthalmology and neurology and has since worked closely with the Departments of Neurology and Neurosurgery. He has been very involved in education within the department and has been named Outstanding Faculty Member five times.

On a national level, Dr. Newman has served on the board of the North American Neuro-Ophthalmology Society, including a stint as vice-president. He has been actively involved in the North American Skull Base Society and served as president in 1998. He was invited to the second American Ophthalmologic History Society Meeting in 1988 and has served on the board, as well as president of the renamed Cogan Ophthalmic History Society. He has played an active role in the educational aspects of the American Academy of Ophthalmology, serving two terms on the BCSC committee and five years on the OKAP committee. More recently, he served on the committee writing the practicing ophthalmology curriculum, as well as serving on the maintenance of certification committee and teaching the recertification course for the last eight years. He has also served on the council of the Academy of Ophthalmology and has received three Secretariat Awards and a Life Achievement Award.

As a displaced New Yorker, Dr. Newman has tremendously enjoyed Charlottesville’s community and is involved in acting with three local theatre groups. He has found time to visit places while running 22 marathons, including one that finished in the Olympic stadium in Athens. He enjoys traveling with his grandchildren and supporting the local arts community.