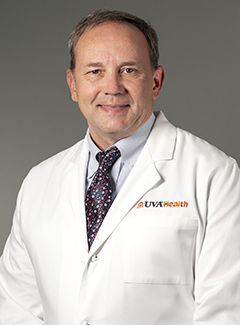 Timothy B. Rooney, MD, is the division lead of breast imaging in the UVA Department of Radiology and Medical Imaging. He is a board-certified diagnostic radiologist with fellowship training in breast imaging.

Born in Salinas, California, Dr. Rooney grew up in many locations on the west and east coasts. He attended Dartmouth College, where he studied earth sciences and was a member of the lightweight men’s rowing crew team. After college, he joined the U.S. Navy and became a fighter/adversary pilot, before returning to medical school at Dartmouth. The second half of his Navy career was spent as a physician/radiologist.

After retiring from the Navy, he worked as a radiologist in Europe, where he cared for our deployed military and their families. Before joining UVA in 2021, he worked as a breast radiologist, assistant program director, and director of global health at Dartmouth-Hitchcock Medical Center in Lebanon, New Hampshire.

Dr. Rooney and his wife, Lissy, an elementary school teacher and literacy interventionist, have two grown daughters. “My family and I are thrilled to live and work in such a vibrant community. I look forward to investigating the cultural opportunities in and around Charlottesville, hiking in Shenandoah National Park, and rowing on the Rivanna Reservoir.”