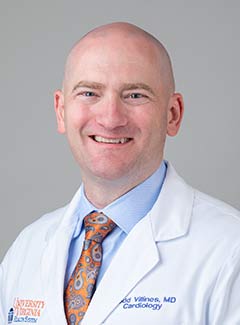 Todd C. Villines, MD, is the Julian Ruffin Beckwith Distinguished Professor of Medicine, a clinical cardiologist and researcher, with a particular focus in cardiovascular imaging and prevention.

Villines completed his undergraduate training at the United States Military Academy at West Point, NY, where he was a distinguished graduate, finishing in the top 5% of his class with honors. He attended medical school at the University of Oklahoma in Oklahoma City, and then completed his internal medicine residency and cardiology fellowship at the Walter Reed Medical Centers in Washington, D.C. and Bethesda, M.D.

Villines is board-certified in internal medicine, cardiovascular diseases, cardiac computed tomography and advanced adult echocardiography. A member of the Alpha Omega Alpha medical honor society, Villines also has won numerous teaching awards and has been recognized as a Master Clinician at the Walter Reed National Military Medical Center, where he served as the Fellowship Program Director (2013-2019) and Director of Cardiovascular Research and Cardiac CT (2008-2019).

Villines has published more than 200 peer-reviewed manuscripts, three books and eight book chapters, primarily in the areas of cardiovascular imaging, outcomes and prevention. Numerous publications have appeared in particularly high-impact journals such as The New England Journal of Medicine, Circulation, the European Heart Journal and the Journal of the American College of Cardiology, among others.

He is the current editor in chief of the Journal of Cardiovascular Computed Tomography (JCCT), and an editorial consultant and guest editor for the Journal of the American College of Cardiology: Cardiovascular Imaging. In addition, Villines served as the editor in chief for the American College of Cardiology’s Cardiac CT Self-Assessment Program, 3rd Edition (CCT-SAP 3).

Villines is immediate-past chair of the American College of Cardiology (ACC) Imaging Section and Leadership Council, he is a past president (2017-2018) of the Society of Cardiovascular CT (SCCT) and a past chair of the ACC Federal Cardiology Section and Leadership Council. He is the former president of the board of directors for the American Heart Association of Greater Washington, D.C.

Villines retired from active-duty military service after achieving the rank of Colonel in the U.S. Army Medical Corps. During his 20+ years of distinguished service, he deployed in support of Operation Iraqi Freedom and Operation Enduring Freedom in Afghanistan where he was awarded the Bronze Star, among numerous other decorations. He is a graduate of the U.S. Army Command and General Staff College, and he served as the leader of Army Cardiology from 2013-2017 as the Cardiology Consultant to the U.S. Army Surgeon General.