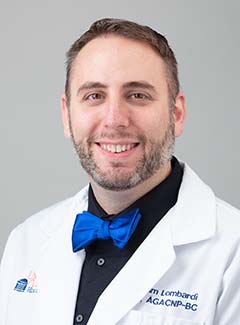 Originally from Chicago, Lombardi remained in the city for nursing school, receiving his nursing degree from Rush University. He began his nursing career as a bedside nurse working with orthopedic patients, followed by a position in the neuro ICU. While working in the ICU, he started a graduate program at the University of South Alabama, where he completed a Master of Nursing, followed by a Doctorate of Nursing Practice, which is the highest level of nursing achievement.

Lombardi is married and has two dogs. In his free time, he enjoys travel and spending time outdoors in the Blue Ridge Mountains or on Skyline Drive.