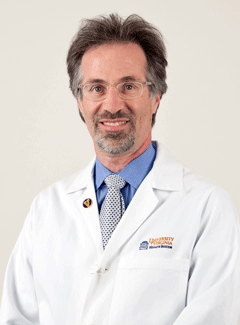 Dr. Haskal is the Director of both the Prostate Artery Embolization (PAE) and Hereditary Hemorrhagic Telangiectasia (HHT) Clinics and Programs at UVA.

Dr. Haskal is a tenured professor of radiology and medical imaging in the Division of Interventional Radiology at the University of Virginia School of Medicine.

Dr. Haskal received his M.D. at Boston University School of Medicine and completed residency and fellowship at the University of California, San Francisco.

As a sought after teacher and educator, Dr. Haskal has given more than 500 invited lectures worldwide and been awarded numerous honorary fellowships, national, international and societal awards for leadership, service and research excellence. He has designed, participated or led more than 40 research trials. Dr. Haskal has also published more than 400 scientific manuscripts, chapters, review, abstracts and editorials in journals ranging from Human Gene Therapy and the New England Journal of Medicine, to Circulation, JVIR, Radiology, Hepatology and more. The AHA Guidelines documented he co-chaired and co-wrote has received more than 2,700 citations.

Dr. Haskal is the editor in chief of two peer reviewed Journals, Journal of Vascular and Interventional Radiology (JVIR) and Gastrointestinal Intervention. As the the editor of the JVIR since 2011, Dr. Haskal has doubled its manuscript submissions, raised its impact factor and introduced numerous print, electronic and new media offerings. He serves in many societal leadership and committee positions — among them the SIR’s Executive Council/Board of Trustees and Research Foundation Board, chaired or served in numerous national committees including within the American Heart Association, American College of Cardiology and American College of Radiology. Dr. Haskal has served as the President of two Societies, the International Society of Neurovascular Disease (2014-2015) and the Society of Gastrointestinal Intervention (2014-2016). He has been near-continuously named to national Top Doctors lists since 1996.