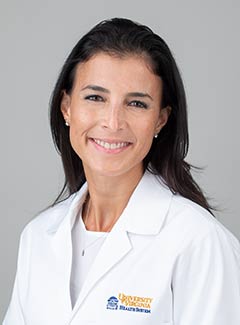 Born in New York City, Rannigan moved to Northern Virginia as a child and attended University of Maryland, where she majored in biology. She was a physics teacher and director of Georgetown Learning Center in Charlottesville for many years before making the transition into the healthcare field.

After earning both a bachelor’s and master’s degree in nursing from the University of Virginia, Ms. Rannigan began her clinical career at UVA Medical Center as a patient care technician. She then became an acute care nurse, working on a step-down neurosurgery unit for six years. In the summer of 2017, she assumed the role of nurse practitioner within the UVA Department of Neurosurgery.

In addition, as a coordinator of care for patients with cavernous malformations, Rannigan is part of a team of clinicians working to provide high-quality care to this patient population and uphold UVA’s standing as a Center of Excellence in the treatment of angiomas. She is also actively involved in the Stroke Education Committee, working to improve efforts to educate the public about stroke.

A mom of four and fluent Spanish speaker, Rannigan is active in the community and enjoys throwing a party for a good cause.