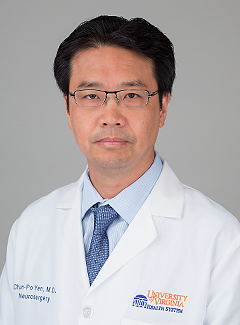 I was born and raised in Taiwan. In 1993, I earned my medical degree from Kaohsiung Medical University in Taiwan. I completed my first neurosurgical residency there in 2000 and also became certified by the Taiwan Board of Neurosurgery. I was on the clinical faculty in the Department of Neurosurgery at Kaohsiung Medical University from 2000 until 2007.

I have co-authored over 100 publications in scholarly journals and 20 book chapters. In addition, I have presented at over 70 scientific meetings and invited lectureships.

I am married to Lichu Kuo. We have two kids, Wayne and Katelyn. I enjoy sports, music and being with friends and family in my free time.