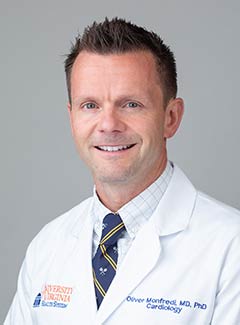 Oliver Monfredi, MD, PhD, is an assistant professor at UVA specializing in cardiology and cardiac electrophysiology. He cares for patients with heart rhythm abnormalities, including heart palpitations or rapid heartbeat, and light-headedness and fainting related to slow heart rhythms, or an abnormal electrical recording of the heart (also known as an ECG). He is experienced in helping patients with genetic conditions associated with abnormal heart rhythms, including hypertrophic cardiomyopathy (HCM), arrhythmogenic cardiomyopathy (ARVC), Brugada syndrome (BrS) and long QT syndrome (LQTS).

Monfredi performs catheter ablation procedures for all kinds of abnormal heart rhythms (atrial fibrillation, supraventricular tachycardia, and ventricular tachycardia). He also implants pacemakers for patients with slow heart rhythms and heart failure and defibrillators for patients at risk of life-threatening heart rhythm disorders. This includes both traditional implantable defibrillators with leads in the circulation and subcutaneous defibrillators or those inserted under the skin. In addition, Monfredi has considerable expertise in implanting newer “leadless” pacemakers.

Monfredi is involved in research focusing on the cells of the heart that control electrical impulses and what goes wrong with these natural “pacemaker” cells as we age. He has a special interest in the development of biological pacemakers and managing and understanding abnormal heart rhythms in special groups, including older adults, athletes and people who are overweight. Monfredi is actively involved in research performed by the UVA Center for Advanced Medical Analytics, where he is working on predicting abnormal heart rhythms in patients admitted to the hospital and how to prevent abnormal heart rhythms before they happen.

Monfredi earned a PhD from the University of Manchester in England and at the National Institutes of Health (NIH) in Baltimore for internationally renowned research in cellular electrophysiology. Today, he has honorary appointments at the NIH and Johns Hopkins Hospital in Baltimore, where he continues to lead and collaborate on heart rhythm-based research.

Throughout his career, Monfredi has published many research papers on all aspects of cardiac electrophysiology. He’s also received several million dollars of research funding from multiple organizations, including the British Heart Foundation and the National Institutes of Health Research in the United Kingdom and the NIH intramural research program in the U.S.

Born and raised in Sheffield, a city in the north of England, he attended medical school at the University of Leeds School of Medicine in the UK. He then trained in general internal medicine in National Health Service (NHS) hospitals throughout Yorkshire and was awarded a Membership of the Royal College of Physicians of the United Kingdom (a postgraduate honor received after the completion of an extensive examination process similar to U.S. medical board certification).

Monfredi went on to train in cardiology and cardiac electrophysiology in Manchester and NHS hospitals in the northwest region of England and was awarded the General Medical Council’s Certificate of Completion of Training in 2017. He completed an advanced fellowship in electrophysiology at Johns Hopkins Hospital before joining the UVA faculty in 2019.

Monfredi is married and has two daughters and a wire-haired terrier. He played elite-level rugby throughout college and proudly represented his county of Yorkshire. Today, he stays fit by running roads and trails, road cycling, hiking and chasing after his girls.