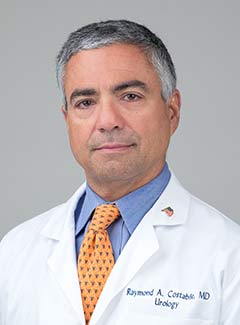 Raymond Costabile, MD, principle clinical and research interests are in the areas of male infertility, male and female sexual health and reconstructive urology. Dr. Costabile joined UVA in July 2004, following his retirement as colonel from the U.S. Army after 28 years of service. He is the John Cole Professor of Urology at UVA School of Medicine and served as Senior Associate Dean for Clinical Strategy from 2008-2014.

Before joining UVA, Dr. Costabile was chief of the urology service at Madigan Army Medical Center in Tacoma, Washington. He assumed that position in 1999 after 10 years at Walter Reed Army Medical Center, where he was an attending surgeon in the urology service. During his tenure he was also an associate professor of surgery at the Uniformed Services University in Bethesda, Maryland.

From December 2001 until September 2003, Dr. Costabile commanded the 47th Combat Support Hospital, including its deployment to Iraq/Kuwait where it was the largest coalition military hospital deployed during the Iraq War. Under Dr. Costabile’s command, the 47th CSH was the principle combat hospital, responsible for caring for over 92% of all battle casualties during the initial nine months of the conflict.

Born in Washington, D.C., Dr. Costabile attended Georgetown University for his undergraduate and medical school education and trained in urology at Walter Reed Army Medical Center. He came to UVA in 1991 for a fellowship in impotence and infertility.