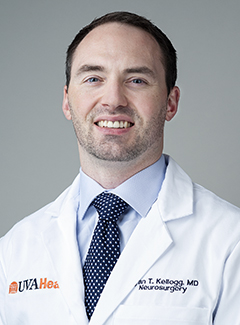 Ryan Kellogg, MD is an assistant professor of neurosurgery with a subspecialty focus in stroke and cerebrovascular neurosurgery. This involves using both open microneurosurgery techniques and minimally invasive endovascular techniques to treat arteries and veins of both the brain and spine.

Kellogg’s research interests include combining computers and technology with medicine to improve healthcare. It’s a topic he’s been eager to explore since high school, and it’s one of the primary reasons he chose to pursue a career in healthcare.

Born and raised in Bellevue, Washington, Kellogg received his undergraduate degree from the University of Washington in Seattle. He then worked in a medical simulation lab, where he assisted with research studies and was witness to the development of new surgical and training technologies. After completing medical school at Duke University in Durham, North Carolina, Kellogg pursued a neurosurgery residency at the Medical University of South Carolina in Charleston, South Carolina, where he also completed a year of endovascular training. This was followed by a second year of endovascular fellowship at the University of Washington.

Kellogg is committed to providing patients with the latest surgical technologies to advance the field of minimally invasive surgery in an effort to improve safety and outcomes. He fulfills this mission as a clinician and also as an inventor; he is the cofounder of a medical device company that has been granted two patents in the field of image-guided surgery.

In his free time, Kellogg enjoys spending time outdoors and traveling with his wife and daughter.