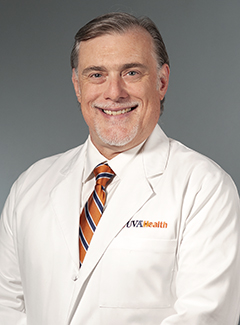 Extracranial Cerebrovascular Disease: Carotid stenosis and diseases of the supra-aortic trunk arteries supplying the arms and brain
Aortic Disease: Aortic Aneurysms and occlusive disease, including blockages in the aorta and its branches to the legs and abdominal organs

W. Darrin Clouse, MD, FACS, became chief of the UVA Division of Vascular and Endovascular Surgery in 2019. He specializes in caring for patients with disorders of the blood vessels. His research and clinical interests include carotid artery stenosis and diseases of the supra-aortic trunk vessels, or those in the chest and neck supplying blood to the arms and brain. He is also strongly interested in treatment and investigation related to aneurysms and occlusive disease of the aorta.

During his U.S. Air Force career, Clouse focused on vascular care development and blood vessel injury management. He completed four tours in Iraq and Afghanistan and retired from the U.S. Air Force in 2014 at the rank of Colonel before returning to the division of vascular and endovascular surgery at Massachusetts General Hospital and Harvard Medical School.

He met his wife, Krista, as an undergraduate at the University of Kansas. Together, they have four daughters. In their free time, they enjoy skiing, hiking, going to the mountains and traveling.