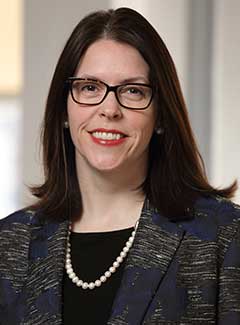 Amy Karr was named as senior associate vice president, Health System Development and executive director, UVA Health Foundation in September 2019 after serving in an interim role since April 2019. In this role, she leads a team of 50 to achieve UVA Health’s goal of $1 billion in the recently launched Honor the Future campaign, and works in partnership with University and UVA Health leadership and volunteers to inspire donors to higher and deeper levels of philanthropic engagement in health.

Amy is a 17-year veteran of the Health System Development Office and has been part of the UVA advancement community since 1996. Previously, she led UVA’s grateful patient fundraising program and the 15-member Healthcare Philanthropy team. Since May 2015, she has served as campaign director, leading the planning and execution of the $1 billion campaign for UVA Health that launched in October 2019.

From 2010-2014, Amy served as the chief development officer for the University of Virginia School of Nursing. Her responsibilities included leading the six-member Alumni & Development team, managing the School of Nursing Advisory Board, and completing a building renovation campaign.

She started at the Health System in 2002 on the corporate and foundation relations team and also served as the chief of staff to two associate vice presidents for Health System Development. Amy began her advancement career at the University of Virginia Engineering Foundation as a graduate student worker, and went on to lead the engineering school’s annual giving and corporate and foundation relations programs.